Thanksgiving is over and what seems to be the most popular season here in the Shenandoah Valley has at least taken a pause – yes, I’m talking about Hunting Season.  And, with this pause, the Sons of Mother Nature have returned to their Day Jobs! Not being a hunter, it was, at first, a bit perplexing learning that Huntin’ Season is somewhat like a National Holiday here. Then I figured, Well, it’s just like St. Patrick’s Day back in Connecticut…but on steroids.  Now, the boys are back in town and work on our house here in Staunton, Virginia has resumed at full pace.

Mike, the Mason, never took a break this past week or so and as a result our block foundation is mostly complete.

This afternoon concrete was delivered and pumped into the foundation’s walls. Only the basement floor now remains to be filled with concrete and then framing can begin shortly afterwards. Our Builders, Eric and Amy Argenbright have scheduled the lumber and other materials to start being delivered later this week.

It’s been interesting watching the construction taking place. Each step has a purpose and a particular sequence. Grading done just so and then trenching footers for the concrete blocks to have a solid base. Row after row of block has been set, checked and rechecked before moving to the next. Then the outside wall of the foundation is stuccoed and layered with tar so as to be watertight. Soon, the day will come that I have my wood refinishing area in the basement. It’s been awhile and for sure, being “retired” does not suit me. So, when I’m again back staining and shellacking American Vintage treasures, all of the work that went into this home – and the workers – will be remembered.

There is one more thing that needs to be done after the foundation is finished, but before the carpentry begins: The Blessing. Hopefully, this coming week, Father Joseph Wamala, pastor of St. Francis of Assisi church in Staunton, will give the completed foundation a blessing, asking God to protect and bless all and everyone that will be supported by the foundation. Once the house is complete, he will then bless our completed home.

Thanks for reading and following our adventure.  Comments always welcome.

So, what’s all this about being “retired? Retired from what, I wonder?

In case you haven’t noticed, I haven’t written a word on my blog for about ten months. I’ve noticed, though. Each time that the thought of writing something, anything, would materialize into a vague urge, it would disappear only to mind-creep again into some form of consciousness. The fact is,  I didn’t have much to say, or write. It was a time to think. And, so I did.

In no particular order my thoughts ranged from: Was I happy? Was it a mistake moving to Florida? If it wasn’t a mistake moving here, was it working out as I had hoped? What was I supposed to be doing with my time, my life? Aren’t retirees supposed to play golf? I don’t play golf. And, I doubt God will hold that against me. He didn’t either, I think.

The happiness question was a tough one to figure. Am I ecstatic? No, or at least rarely. Am I unhappy? No, I’d say it’s more that there’s a feeling of being unsatisfied or unfulfilled. Hmm, after six months or so of “deep thought” this was the best I could do? Oh, well, it was a start.

Now, The Move thing. Was it a mistake? No, of that I’m sure. If we hadn’t left Connecticut life probably would have been more difficult and certainly more unpleasant. Florida has been good in a number of ways. I obtained my commercial driver license and became a Licensed Tour Guide in St. Augustine. And drove The Red Train! That was mostly interesting and fun… until the heat became a bit much. 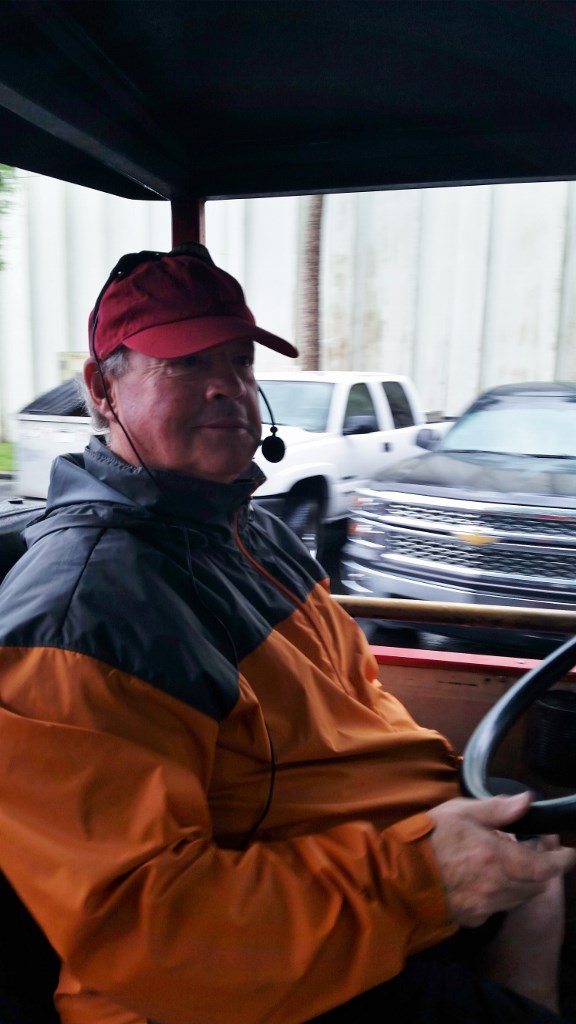 We also turned a somewhat wreck of a house into a really beautiful home that became a favorite gathering place for the friends we made here. That was fun, interesting and a useful thing to do.

And, we made some nice acquaintances and friends here. Some are gone. Some moved on. But, the really special ones, the true friends, will remain an important part of our life. But…here it comes, the heat. Who wudda’ thought? My DNA, my genetics, whatever, are just not capable of enjoying 6 months of what I consider summer and 3 more months of what can best be described as, “The Nether World”.

Other than that, it’s great! And, that heat did something I did not expect. It took away my desire to do much, especially outdoors. It and I just weren’t working. And that brought me to my next Big Question: What was I supposed to be doing with my time and life?

Surprisingly, that was the easiest question for me to answer. Simply put, I was meant to work; to do something that mattered – to myself and maybe to others. I enjoy working. Really. And so, over these past 10 months I’ve pondered, along with my Redhead, as to what to do. We travelled some distances, too: Tennessee, North Carolina, and South Carolina. Searching to find a place that better suited us and we it. We searched these areas several times and came pretty close to deciding upon Greenville, SC as being our new home. But, in the end, each had some shortcoming (for us) that we wanted to avoid: too much development, too remote, too hot (that was a deal breaker for several places), too costly or too kooky (and believe me, I know kooky)! And, then, an unexpected, but entirely welcome, event happened and it gave us reason to check one more area in our quest – Virginia. I resisted at first. My impression of Virginia was that it was too hot and too close to DC. I guess some geography lessons in grammar school were for naught. After lots of research, we became intrigued by the Shenandoah Valley area, particularly the Staunton area. The climate seems agreeable: moderately warm summers and with lower humidity and cooler night temperatures than here in Florida, real winters with snow, but perhaps a bit shorter in duration than Connecticut winters. Our adventure up there during July was very pleasant – jeans during the day and a light sweater some nights. Also, for me, the allergies that plague me here in Florida were welcomingly absent in the Staunton area.

There are a number of other things about the Valley that appeal to us both, but one in particular calls to me: auctions. Yes, auctions. Because, back in Connecticut, it was at small town auctions that I discovered some of my best antique and vintage furniture finds. And that was the foundation of my passion – taking old, sometimes just plain discarded furniture and restoring it and finding it a new home. It was work. And it mattered to me and to the many people that wound up with a piece of furniture from Redeux. 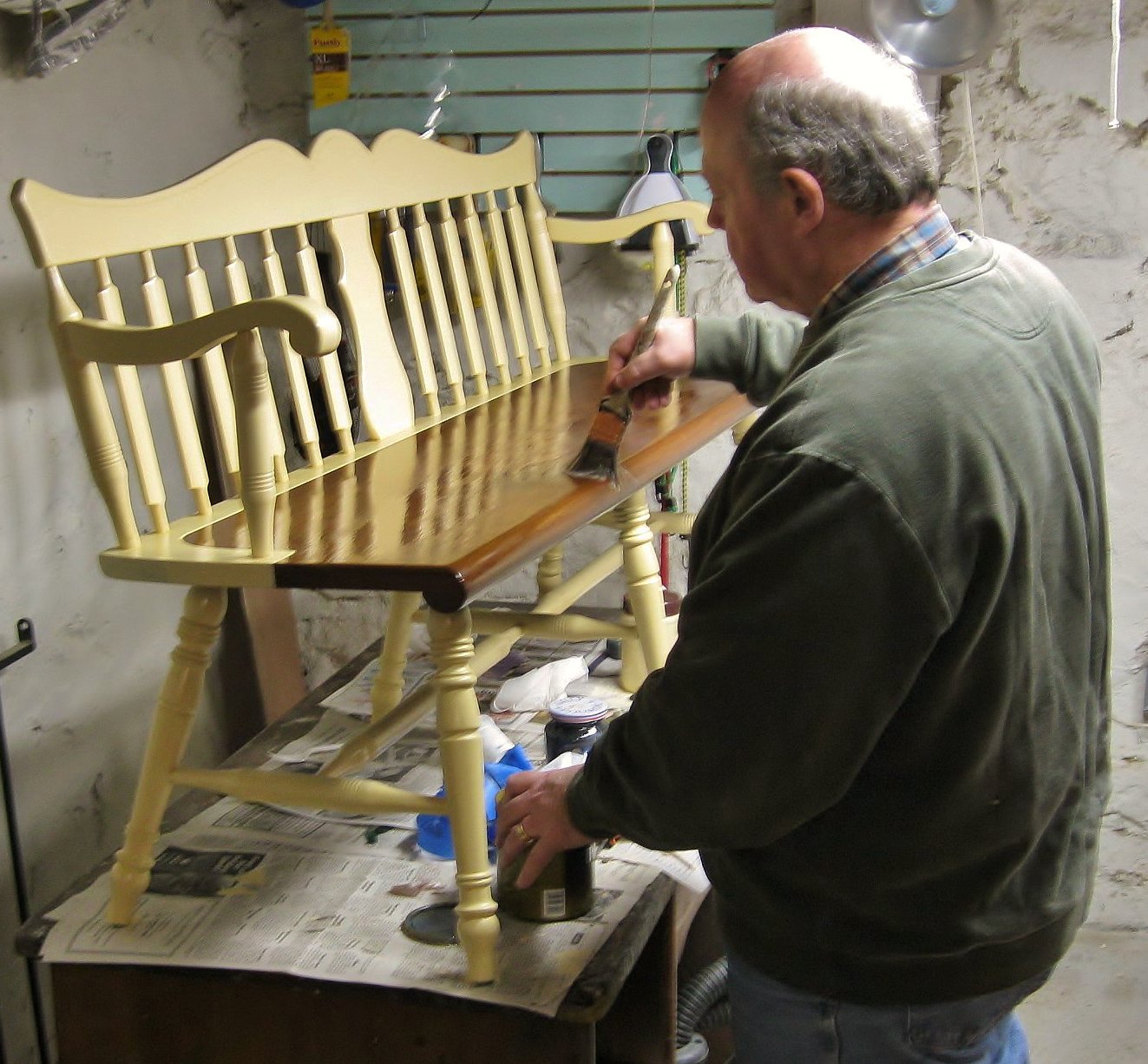 And, so, this week we placed our beautiful home on the market. Within a few hours (and after praying for God’s guidance and St. Joseph’s intercession) we had an offer. In two months we will say goodbye to Florida.

Life lover with a gypsy soul. Wanderer whose mind is never lost but feet are forever searching for placement...my creative writings that might make you think or smirk. It's all up to you.

Homesteading on 2 Acres - a Girl and her Dogs

Homesteading on 2 acres in a tiny house; a girl, her dogs, and some vegan recipes

'Growing old is mandatory; growing up is optional.' Chilli Davis

hold a mirror up to life.....are there layers you can see?

A Treasure Hunter with a Metal Detector

What will distract me today?