So, 8 days after moving into our still-being-renovated home, we are tested. Tested in our resolve to keep going, in our faith in believing that we have done the right thing and tested in patience.

It began with the air-conditioning starting to act a bit quirky. Some days it would run fine; other days it would cause the circuit breakers to trip.  The electricians checked the box and said the breakers were fine. The home-warranty company sent a tech out and he found nothing. Maybe it was all the work being done that caused an electrical overload, he thought. When the breakers for the unit tripped during the day it was inconvenient. At night it was something else.  Waking up sweating and knowing that I’d have to go into the garage to re-set the breakers was beyond inconvenient. Everyone knows, especially those of us born and raised in northern cities, that southern snakes lay in wait for us to walk in slipper-clad feet into a dark garage. Past moving boxes and assorted renovation material I needed to go. So, a plan for dealing with the sure- to- be- lurking prey needed to be devised. Aha, confrontation! So, I’d get up, turn on every light on the way into the garage and start banging on the walls and saying loudly, “come out you dirty bums and I’ll cut your heads of”!!  It worked. Never did those dirty-bum snakes show up. When I’d get back to bed the Redhead would just look up and  say, “Are you crazy”? I suppose she just doesn’t understand the theory of Sun Szu and his The Art of War.  But, it worked.  This was only the beginning of what was to come.

After another week of the air conditioning acting up, it just died. Gone, fried. The condenser was completely shot we were told. Not to worry we thought. Our Home Warranty, purchased when we bought the house, was meant for just such an emergency. A little over a week in our new home and we now have no air-conditioning in 95 degree weather. The indoor temps stayed in the 85- 90 range. Thankfully, we had extended our apartment lease until the end of this month, so a night or two sleeping on our pull-out sofa until the unit was fixed wouldn’t be too bad. Or, so we thought. Wrong. For whatever reasons, the warranty company has kept dragging its feet authorizing the repair/replacement of the unit. Repeated calls just kept us moving through an anonymous labyrinth of “help desks”.

Having gone without air for over a week, with no help from the warranty company, we bit the bullet, called a local A/C company that was recommended by friends, and had a new unit installed. We knew we would need to get a new one someday, but had hoped to get a year or so of use from the old unit. What’s the old saying about, “best made plans”? The warranty company says that it will give us a “buy-out” for only the wholesale cost of the condenser unit part of the system. At least it something and now we have a very efficient unit cooling our house. Beware of Home Warranty policies when buying a home!

Our sun room addition was going along nicely. Ahead of schedule, actually. It will be a nice room with a great place to view the pond. Yesterday, the workmen building the room discovered some wood damage on our chimney area that was undetected during our pre-buying home inspection.

We need to get it fixed before we can continue. We have called our carpenter friend, Wayne, to give us a second opinion and possible fix. We’ll know tomorrow what our real situation is.

On the bright side our interior work has just about been completed.

The new baseboards are being installed and I’m taking care of some minor electrical work like moving switches.

The kitchen tile back splash is completely finished and looks beautiful. Pictures have the glass tiles looking green but they are more like sea-glass blue.

Tonight, The Redhead made dinner in the new kitchen of our once-again cool house. All  is good. We have faith. And the vision of Sister Swammy that this truly is, “Our House”.

We’ve begun to bring a few of our belongings over to our home: bags and boxes of clothes, some linens, pottery and two pieces of furniture.

I just had to hand-carry our Victorian muffin stand (from my old Redeux Furniture shop) and an arts and crafts period clover leaf side table. The pottery pieces, from local artists, were also taken to the house today to ensure their safe passage. If those old pieces of furniture could talk I wonder if they would be saying,”where the heck are we”, or “hey, there’s no dust here”! In any case, they are a long way from their original New England homes. Hope they like their new digs!

Being somewhat gluttons for punishment, we’ll enjoy only a day or two of relative quiet in the house. Sometime between Tuesday and Friday the following is scheduled to happen: The kitchen finished – counter tops installed, drilled for fixtures and all fixtures installed (at least we have the refrigerator); bath vanities completed with counters and fixtures; all remaining electrical hookups completed. Then the fun starts! The foundation for the new sun room has been staked. The city inspector is scheduled for sometime Monday (maybe he will help carry a few boxes!) to give the go-ahead approval. Also, Tuesday is when the dumpster for the new roof is being dropped off. The roof will be started sometime after Tuesday and will take about 2- 3 days, weather permitting. The foundation for the sun room will be poured sometime next week and work will commence on the frame about 3-4 days latter. With luck, everything will be completed by early to mid-July. Of course, we will be living in the house all this time. We leave the apartment entirely by the end of June. But, we expect to be completely out as soon as our appliances are hooked up at the house. Whew! 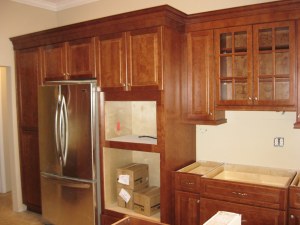 The kitchen cabinets are turning out to be fantastic. The carpenter installing them is Mr. Wayne Moss. 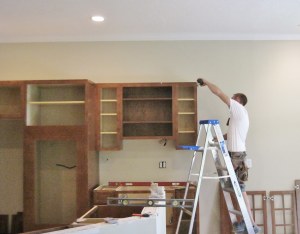 Wayne has his own woodworking company but is the installer for the kitchen cabinet folks. Lucky us. Wayne is a perfectionist and has an old fashioned ethic about him. 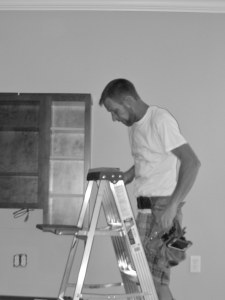 As he was making sure everything was just right with the cabinets, the layout man for the counter tops arrived. Watching him measure and cut the patterns for the tops was intriguing. It turns out he used to work for Embraer – American Airlines in Brazil. Life happens and now he uses his skills to be the pattern-maker  for one of Jacksonville’s best stone, granite and quartz fabricators. 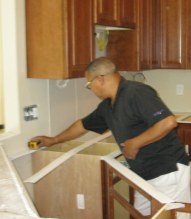 When friends and family visit us they will see the work of several very skilled tradesmen – tilers, carpenters and stone cutters. It is amazing what God has done for us by putting these folks in our lives. 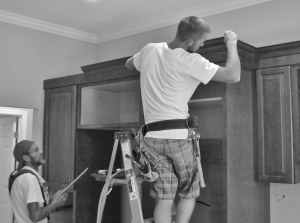 With all of this work going on around us, I am getting the itch to again start working on some furniture. My skill level is nowhere near that of some of the men that has worked on on new home. But, in looking at some of the pieces from my shop that we kept and will put into our new home, I am grateful for the “new-life” I was able to restore into so many pieces. 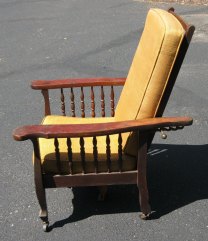 A real Morris chair. Soon to be restored by Redeux South!

Sometimes, it is interesting to guess where all of those bits of furniture are now and how they are being used. Ours will always be treasured.

In looking around for just the right piece to put under our TV I’ve searched through several antique and cottage furniture shops in Jacksonville and Neptune/Jacksonville  Beaches. Today I re-visited one on the beach, Bungalow by the Sea, that is a small beach-type house with several rooms, each for a particular artist or crafts-person. Perhaps I’ll look into putting some things there. But, first, there is this little thing called renovating a house that is keeping my attention. You never know, though.

Hope we see you soon!

Life lover with a gypsy soul. Wanderer whose mind is never lost but feet are forever searching for placement...my creative writings that might make you think or smirk. It's all up to you.

Homesteading on 2 Acres - a Girl and her Dogs

Homesteading on 2 acres in a tiny house; a girl, her dogs, and some vegan recipes

'Growing old is mandatory; growing up is optional.' Chilli Davis

hold a mirror up to life.....are there layers you can see?

A Treasure Hunter with a Metal Detector

What will distract me today?

Because Women Detect Too

Back To Stable Hill
The Accidental Domestic Goddess